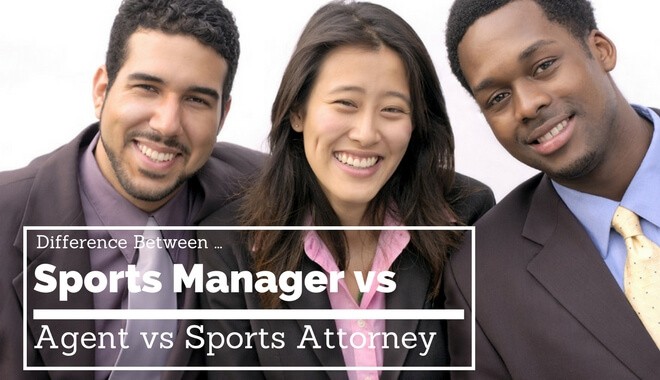 Though we all love sports, only a tiny minority are actually athletic enough to compete at the highest level.  Sports agents and sports managers are also work in sports but are sports agents lawyers?

For the rest of us who still want to work in the sports industry, one rewarding and profitable career path is that which has been popularized by super agents, managers, and attorneys over the last few years, such as Mino Raiola, Scott Boras, and Jorge Mendes.

But there is one mistake most people make—sports managers, sports agents, and sports attorneys aren’t the same thing. There are slight and huge differences between the responsibilities of these three roles. Knowing these differences is crucial before you set out on a career path that you might end up hating.

The sports manager has only one goal—make the athlete’s or team’s lives easier. The top sports athletes are involved in much more than they can handle, and can’t afford to spend hours nitpicking every document they’re required to sign.

The sports manager essentially plays the role of a guardian over the athlete, ensuring that the athlete has the space, time and clarity of mind to train daily at top performance.

Additionally, the sports manager also at times works for a team or an organization rather than for an individual player.

In these cases, the manager’s responsibility includes keeping a balance between the team, scheduling and deciding tactics and training sessions, and handling the day-to-day work that the team is involved with.

Many times, the manager will represent their client team or athlete in press conferences, feeding the media with information related to their client.

The nuances of the sports manager’s responsibilities also depend on the sport and region in question.

In football (soccer), the sports manager is synonymous with the club’s head coach, and deals with transfer negotiations, training and coaching the team, tactical planning with the players, and standing on the sidelines yelling out instructions during the match.

The club’s success (or lack thereof) is largely attributed to the sports manager in charge, and they will take the blunt of the praise or criticism, resulting in positions that can last anywhere from just a few months to a few years, with only a handful of top sports managers holding their role for over a decade.

For American sports, the sports manager usually plays a smaller role, generally delegating these tasks to other coaches and trainers rather than taking everything on himself.

Out of the three positions—sports manager, sports agent, and sports attorney—the sports manager is most involved with the sport itself. This means that they have the most exciting and most volatile career paths, especially if they get into the field because they genuinely enjoy the sport itself.

Because of this required balance of marketing skills and tactical skills, most sports managers take a bachelor’s degree in sports management and have some level of experience playing their respective sport.

The sports agent is less involved in the activity of the athlete and more involved with his or her contracts and endorsements.

Unlike the sports manager, who is employed by a single team, organization, or individual to accompany them through their careers, the sports agent often represents several clients at any given time, as they are less “hands on” than the sports manager.

For example, when a team needs to sign a new player, the agent will be involved in every step of the process, representing whichever party that he works for, and ensuring that his client gets the best deal.

The sports agent will be involved in negotiating the salary, bonuses, image rights, and everything else the player doesn’t have the time or legal expertise to concern him or herself with.

As expected, a sports agent travels much more than a sports manager or a sports attorney.

As agents are required to promote their clients, their work involves having meetings for potential endorsement deals as well, and the most popular athletes around the world could have dozens if not hundreds of brands signed to them at one time.

While a college degree isn’t required for this career path, the most qualified sports agents hold master degrees in fields such as business administration, sports management, and even law. The basic requirements for a strong sports agent would be skills in verbal communication, legal writing, and negotiation.

Out of the three paths listed above, the sports attorney is by far the most overlooked, and it isn’t a surprise.

Most kids growing up hear only about the sports managers who run the team and stand on the sidelines, and the sports agents who make multi-million dollar deals, making the same or even more money than most top-level athletes.

But sports attorneys are just as valuable to any top athlete or sports organization, and these play very different roles from sports agents and sports managers. So what responsibilities fall under a sports attorney or sports lawyer?

These would depend on the sport you specialize in, the organization you work for, and the level of the athletes you represent. There are sports attorneys who work for player unions, others who work for leagues, and some with the administrative duties for governing federations.

However, the general responsibilities of the sports attorney usually include:

It can be easy to confuse a sports agent and a sports attorney, mostly because their responsibilities occasionally overlap and they both have backgrounds in law. However, the key modifier between these two is exactly that: their background in law.

While it would only be helpful for a sports agent to have a law degree, it would be required for a professional sports attorney to possess one.

The sports manager, sports agent, and sports lawyer can be visualized as a Venn diagram with three circles crossing over one another at the edges.

While all three do occasionally fulfill the same responsibilities, there are cases—more often than not—where their job descriptions are vastly unique. Essentially, their responsibilities can be summarized as follows:

Whether you choose to become a sports manager, sports agent, or sports attorney, your choice would ultimately rest on the type of person you are. However, all three career paths offer exciting and interesting situations and decisions; all that matters is what you want to do.